I Can Die Happy Now

There are moments in my life that I'm convinced that God looks over at the angels, grins and says "hey watch this".

Randy and I have had tickets to see Coldplay at American Airlines Center in Dallas since last June. The second they went on sale I bought them. Last night was the big night and we were so excited. However, I must have been due to be rear-ended in rush hour traffic because it had been a while since the last time. But of all nights for it to happen, this couldn't be worse. I was terrified I was going to miss the concert. Fortunately, the car drove fine after I exchanged information with the 19 year-old kid (who wasn't paying attention).

We made it in plenty of time to wish that the opening artist was on his last song and that Coldplay would take the stage. I sat there in my seat, wishing I was closer to the stage and being a little jealous of all the radio contest winners who were on the front row. It was as if God thunked me on the head and I realized I should really just be thankful that I was there in the first place.

The concert finally started and it was amazing. We kept reading reviews that if you were going to see a concert, this would be the one to see. And boy was it. They were amazing.

About half way through I turned around and noticed that about three rows behind us and a little to the left, there was a microphone and three guitar stands set up. I turned around to Randy and said "no way!" Sure enough after a couple more songs, they came down the ramp and up the stairs and this is what we got. 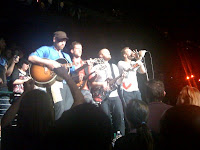 I pretty much wept. We couldn't believe it! Out of all the thousands and thousands of people there and all of the hundreds of places they could have gone in the stadium, they stood right behind us. Randy is convinced that Chris Martin was looking at him. They sang "The Scientist" and a couple of other songs. It was the most unbelievable thing and I barely slept all night.
Posted by Carrie at 11/20/2008 03:06:00 PM

I laughed at your title! too cute. Well then sweetie, if your ready....start praying for the rapture. I'm ready!