I can't believe my baby is 10! He chose to go to Posado's for dinner. It was a really nice evening so we sat outside on the patio. 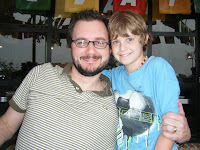 Randy got to the restaurant before us and asked if they could do something special for Graham's birthday without the loud and annoying singing. They brought him this! 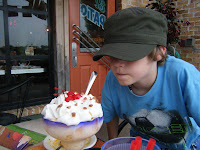 Graham got a skateboard and Guitar Hero World Tour for his birthday. Although, I think Randy must have used his Jedi mind tricks to talk Graham into getting the Guitar Hero, because secretly it's what Randy really wants. 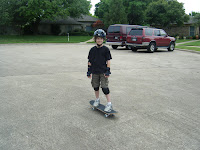 The following Saturday we took Graham and two of his good friends to Kobe Hibachi. We had so much fun! 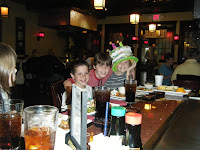 Graham got to wear the goofy birthday hat. 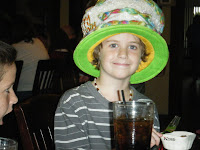 After we ate we (and by "we" I mean "they") played laser tag. Randy learned a hard lesson about not stuffing yourself with fried rice, steak and chicken and then running wildly through a laser tag course trying to defend our kids from the teenagers. This is not them playing laser tag. It's just a cool picture of our chef firing up the grill. 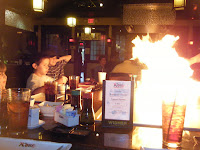 Happy Birthday Graham!! I can't believe you are that old. Hope you had a great time. :)