What I Did on My Summer Vacation

This summer, oddly enough, seemed to be a pretty long one. I was without Rachel and Graham for about a month and a half since they were with Doodad at camp. As soon as the bell rang the last day of school, they were in the car headed to Arkansas. I finally picked them up the first week of July and I believe they were very ready to be home. We got to spend some time at Nini and Pawpaw's shooting some fireworks on the 4th of July, which was great and even required a jacket or a blanket while sitting on the porch at night.

We were able to go to Colorado Springs for our road trip this year. We really like road trips. And you pretty much have to like road trips to drive across Texas headed to Amarillo. That's a beating. Especially when you're the one doing the driving and everyone else is asleep and it's 6am on a Sunday morning.
I tried to choose some pictures that hit the highlights, so if you want to see some more you can come over to my house and we'll have some pie and watch a slide show.
Our first day we went to the Garden of the Gods. The rocks were amazing. 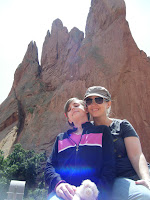 This rock had a hole in it so Graham stuck his head in it. Naturally. I love this picture. Randy and I were on top of another big rock. 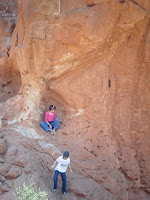 This is looking down from a balcony at the Cave of the Winds. We took the "Lantern Tour" which meant we got our own lanterns and walked through the cave without the lights on. That's why I don't have any pictures of inside the cave. 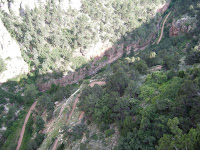 This is just a pretty picture of Rachel. Isn't she pretty? Let's all just look at her. 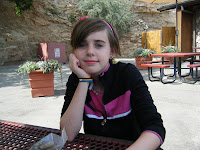 This is on our way up to Pike's Peak. This is where "America, The Beautiful" was written. I can see why the author was so inspired. 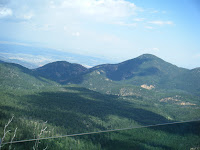 Here we are at Pike's Peak. It was 43 degrees. I was freezing. They have really good donuts at the top. 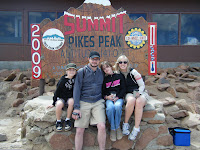 Okay, so one of our days it rained so we didn't get to do anything but drive around. Here's the conversation that Randy and I had in our parents' Yukon:
Randy: Hey take this road right here.
Carrie: Honey, I really don't think this is a road. I think it's a path for hikers.
Randy: No, it says right here on the map. It's a road. Just trust me.
Carrie: Are you sure?
Randy: I'm sure. See? The sign says "two-way traffic".
Carrie: Are you sure? It doesn't look wide enough for two-way traffic.
(After we've gone a little ways down the dirt road on the side of the mountain)
Randy: Hey, Carrie, you might want to veer to the left a little.
Carrie: Why's that?
Randy: Because of the sheer cliff I'm looking straight down.

This is the road we were on. There was a tunnel ahead and we were all excited. We did meet a car on the other side, but it was all very civilized and we didn't go off the cliff. 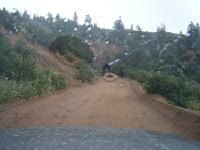 Randy and I got to celebrate our 15th wedding anniversary on the 13th! We went to The Melting Pot which is fondue. Oh my goodness it was so good. 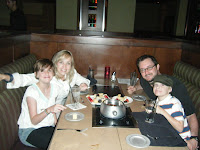 On our way home, we stopped at Royal Gorge which is just south of Colorado Springs. It was gorgeous. We had picnics everyday for lunch and this was our view on that day. 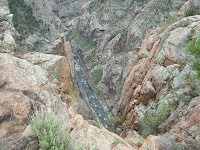 Colorado Springs was so beautiful! It was such a nice break from the heat and the scenery was just breathtaking. I'm so glad I have such a cool family. It's a good thing we all like each other.
I also have to say a big giant "thank you" to Randy's parents for letting us use their car. It made the trip so much easier!
Posted by Carrie at 8/24/2009 08:45:00 PM

I'm so glad y'all did NOT go over the cliff in your car!