Saturday our plans were to go to the Louvre, Eiffel Tower and Notre Dame. We woke up really late (1pm and had no idea) and made it to the Louvre.  Well, about a third of the Louvre. There are three different sections and we saw all of one and a little bit of the second. We sat on some steps to escape the drizzle and eat our sandwich, on a baguette of course, and our beignets before going in. 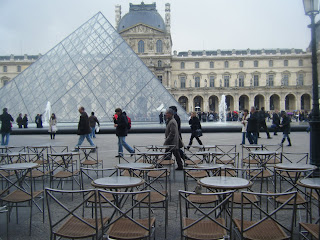 This is the Venus de Milo. For some reason this girl was standing there trying to pose like the statue. I kept trying to find her friend that was taking her picture, but there wasn't anybody. Strange. 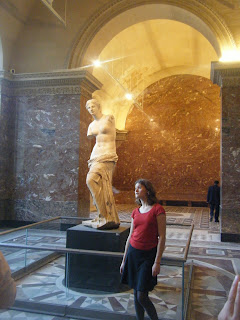 The Louvre was originally built as a fortress. These are parts of the walls and lower levels of it. Here's Randy doing his best to translate the sign. He spoke more French than I did. All of the signs were in French so we had to guess on a lot of it. 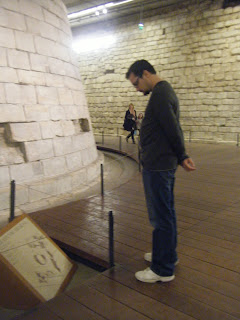 We took tons of pictures in the Louvre, so it would be hard for me to show all of them on here. I really didn't think I was going to like it as much as I did. I actually went back the following Monday and took the audio tour on the stuff we missed on Friday. I still didn't get all the way through it though.