This was our last day in Paris. Randy had to work, so I took off by myself. Since we hadn't gotten to tour Notre Dame, that's what I did. 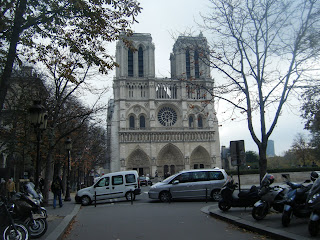 In the main church area. It was very quiet...except for the Germans. I thought Americans were loud. 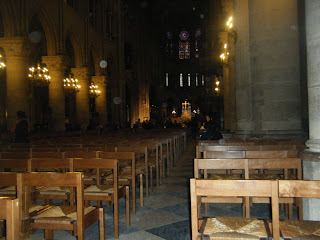 Just one of the Rose Windows. I really miss stained glass windows. There were so many throughout the whole church and each one told a story. 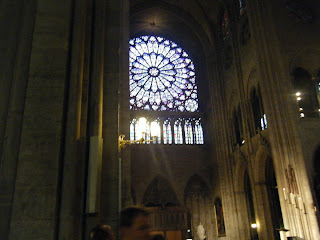 Halfway through my audio tour I hear a loud bell and the alter boys with the priest came out. He delivered a sermon while the tourists just walked around. It was a little odd, but fun to see. 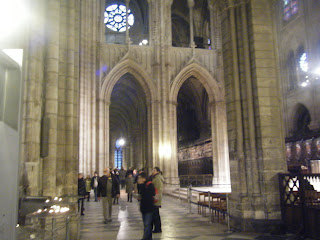 After I had finished touring ND, I went back to the Louvre to see if I could finish seeing it. I think you'd really have to dedicate two full days, if not more, to seeing the whole thing. This time I took the audio tour. You really could spend hours and hours there. This picture is of a "vase" that Solomon had built. I know, right?! It was for water and it holds 20,000 gallons of it. It was huge. I was amazed at how much the Bible was referenced when they explained how we know about the origins of things. 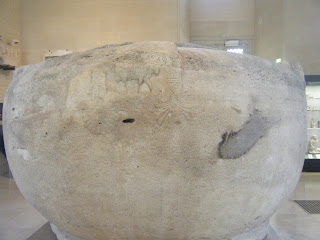 This is a real mummy. I took this picture for Graham. You can see next to him (actually, I think it was a her) are the tools they used to...extract...her innards. 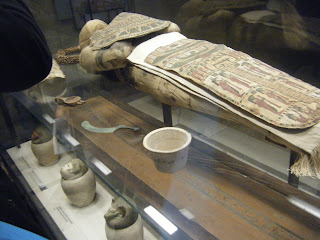 I loved this one. I really wanted this to be a compelling story, but it's not. It's a statue of a knight, Phillip I believe, who had died. He wasn't great or notable. Those little guys reminded me of those other little guys in Star Wars. I can't remember what they're called. I did look under their hoods and there is somewhat of a face painted on there. 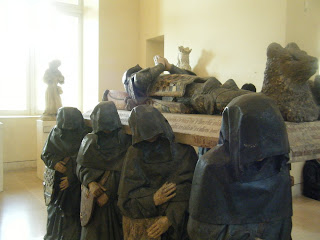 I got turned around at one point and found myself in a part where there was no one. I was trying to find my way out but kept getting led down long halls and up and down staircases. I'm so glad I got lost because out of nowhere came Napolean's apartments. This is his dining room. Wow. 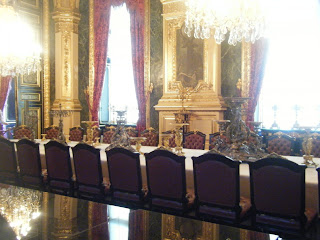 This is where he'd entertain people with plays and concerts. In the other room, just past those curtains, they'd stage a play for the people in this room. They could close those curtains so it'd be more like a theatre. They also had carpet on the floor for better acoustics. 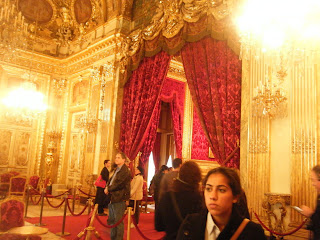 Our last night in Paris! Randy did a wonderful job of navigating us around. We had this map that we used the whole time we were there. I think we had two more that were the same map, but for some reason we held on to one in particular. It had been the one I used the first day I got lost, so it was all flimsy from being rained on and it had all our destinations circled. When we got off the train this night, Randy had left it in the seat. We were both devastated, but figured it was the city telling us we had the hang of things. After wandering for a while to find this restaurant and going in circles, Randy realized that his phone had GPS and we could have been using it the whole time! This is a picture of the last restaurant we ate at- the oldest one in Paris dating back to the early 1600's. Voltaire came here frequently. I also have a picture of where Victor Hugo (Les Mis) would sit. It was amazing and the food was so good. Randy ordered snails, which suprisingly were actually quite tasty! I had duck and as we did every night in Paris, we topped it off with Creme Brulee. 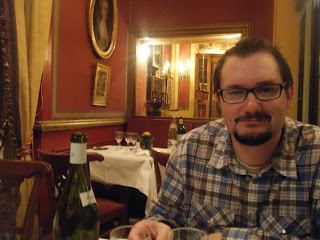 Oh Carrie, I have so enjoyed looking at all of your Paris pictures! Looks like y'all had a fabulous time! I'll let you see my pics of Versailles if you want to see it in the Spring as I went in April. :) And, I realized that I did not spend much time in the Louvre. How did I miss Napoleon's apartments?! J'adore Paris! :)