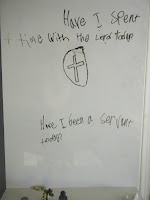 Carrie, This is precious!! You have two GREAT kids that they Lord has blessed you with. I hope mine turn out half as good. Love you cuz!!