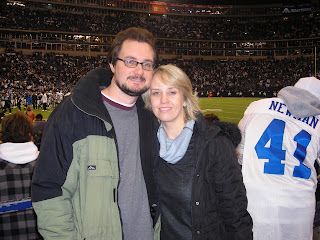 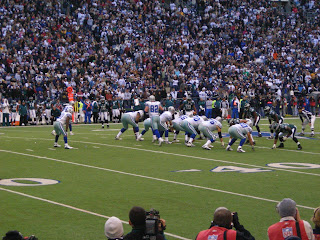 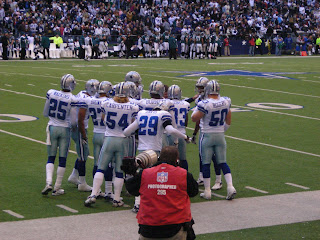 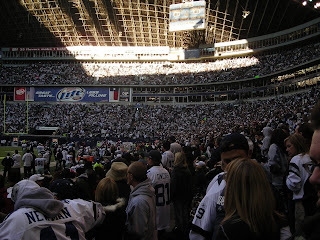 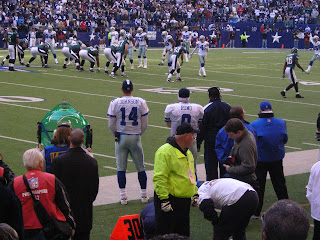 Sonny, Randy's dad, was hunting with a friend a few weeks ago and mentioned how he'd always wanted to go to a Cowboy's game. The friend whipped out his cell phone and called his friend, Jerry, and within minutes had 4 tickets and a parking pass to the next game against the Philadelphia Eagles.
Unfortunately because of health reasons, Sonny and Corienne were not able to go, so we asked two of our good friends Stan and Eric to go with us. We sat on the 20 yard line on the the 3rd row...right behind the Cowboy's...in the same section with their families.
Now Randy and I are not huge football fans and I couldn't help but think the whole time that we so did not deserve to be there, but we were all beside ourselves. It was overwhelming and so...big.
Stan drove us there in his big Ford SUV and did a very fine job. He is quite an aggressive driver, but I will say that everything he did was legal. He saved us a lot of time.
We lost the game, but we didn't really care. I don't think anybody else cared either, because it seemed like everyone else was just so happy to be there. There was a girl that was right behind us that yelled. The whole time. I mean didn't miss a minute to cheer on the 'boys and ask the other team where they were going (i.e. "Where you goin'?! Nowhere!). Her husband was obviously embarassed, but she insisted that this was her birthday and she'd never get this opportunity again. We didn't mind so much after that.
It was the opportunity of a lifetime and I don't ever think I'd be able to fully describe the feeling.